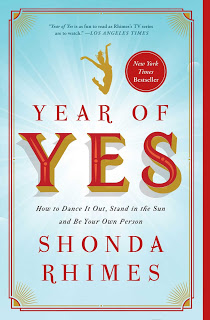 Right before the New Year I read Year of Yes by Shonda Rhimes. I was so impressed by the book that I will most likely read it again this year. I absolutely loved this book and the premise around it!

In the book Shonda Rhimes tells about her life and how she never said yes to anything. She always found an excuse to not go to events or to make appearances on shows. Throughout the book the reader followed Shonda Rhimes as she began saying yes to things. Some of the things she said yes to were; making a commencement speech, getting healthier, going to more events, and playing with her kids more.

One of the things that I decided to say yes to more is going on more dates, which was harder than imagined. I found that I wanted to stay in and see if my favorite characters from Greys Anatomy would get together or see how the house Chip and Joanna Gaines fixed up ended. I can say that I have gone on more dates than I did last year, but have stayed in a lot.

The second thing I said yes to was more of a social life. I made it a goal to spend more time with friends and would not make up lame excuses as to why I could not hang out. Just from doing that I have noticed that I have more people to talk to and am happier.

The last thing I made a point to say yes to is to not being as shy and afraid of the outcome of things. As I said a few posts back I took a chance and asked someone out. It took a few months of me trying to get the words out, but it took a year of me telling friends I would do it. I finally said yes to asking and I did it. After saying yes to that it became easier to stepping up and talking to more people. I’ve realized that it does not matter what they think of me and in the end at least I tried.

Year of Yes is a great book and definitely a must read! In the comment section below tell me what some of the things in your life you want to say yes to more.